Simply Static is now one year old!1 Yay! Lots of great things have happened over the last year. Simply Static is installed on over 2,000 WordPress sites and has been downloaded more than 16,000 times. The plugin has 33 reviews, all with five stars. I’m encouraged by the fact that the plugin is used as much as it is even though it still doesn’t have many of the features I would want.

One thing I’ve noticed is that the majority of Simply Static’s users are outside of the United States. Or at least the ones I hear from via email and the support forums are. And I would assume that’s fairly representative of the user base. I’m curious if that’s common amongst other WordPress plugins or specific to mine. Regardless, I think it’s great. I’ve spoken with folks from all over the world that I never would have come into contact with otherwise. And I’m humbled by everyone’s English skills. I only speak and write English myself, and so I am grateful for any attempt to communicate in my native tongue.

I’m also thankful for how many people have offered to help with Simply Static. Folks have posted about issues they’ve found, offered patches and translations, and even created a new logo (coming soon!). I am lucky to have so many folks helping with so many different things.

Sadly, Simply Static hasn’t been growing as fast as I’d like. The number of downloads has been increasing at a steady clip, but the number of active installations has flatlined. I had anticipated hitting 2,000 active installs on February 11th. That didn’t happen until May 30th. And then after that it actually decreased below 2,000 for a while. It wasn’t until September that it finally regained 2,000 installs and stayed there.

With 16,000 downloads, this means that only about 15% of the people that download Simply Static keep it installed. I can attribute some of that to people using Simply Static to export a static site and then shutting down WordPress2, effectively using it as an archival tool. That’s a usage I wouldn’t have expected when I started. But a fair bit of those uninstallations must be due to missing features or not being easy enough to use3.

I’m including the downloads vs installs chart, but it’s rather depressing. The red line for installs shows it decreasing back to zero. In reality I’ll hit 3,000 at some point. If my conversion rate stayed the same, that would likely be sometime in February of 2017. 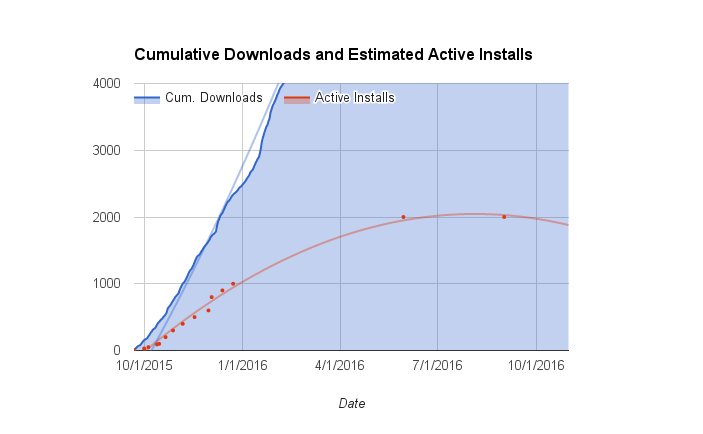 I’ve also not launched a premium version of Simply Static yet. I planned to do that earlier in the year but a couple things derailed that. One is that I felt like Simply Static needed more bug fixes and improvements first. The second is that I got a contract to work on a WordPress site over the summer and that ate up all of the free time I had. I’ve learned that I can’t multitask on projects. If I take on a contract, Simply Static will receive no attention.

I want to launch a premium version of Simply Static by the end of the year, but my backlog of tasks is growing faster than I can work through them. I don’t even have a good idea of how “done” the free version needs to be before working on a premium version. And that makes releasing a premium version by year’s end exceedingly unlikely.

I’m again in need of a backwards plan. I need to figure out what I’m going to ship for the free and premium versions and put dates to it. And… this is exactly the same thing I said a year ago. It’s funny how easy it is to slip back into your old ways. Shipping requires diligence. A lot of it.

1This post was originally entitled “Simply Static turns one today”, for publication on September 22nd. It’s now nearly a month later. Apparently I’m not good at keeping a schedule.
2The active installs figure is calculated based on how many WordPress installations “phone home” to report on things like which plugins are installed. Shutting down WordPress after using Simply Static would make it no longer count as an active installation.
3I am strongly considering adding Freemius Insights just to get a better gauge of why people uninstall.